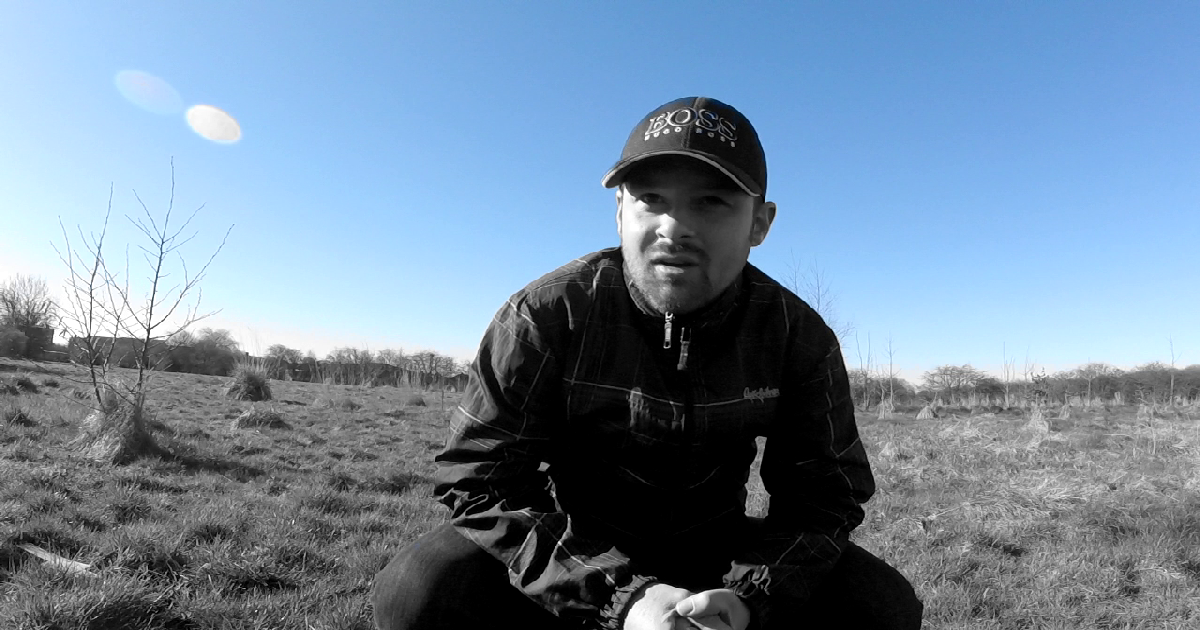 I’ll put it to you this way…between the name of this project and some of the extremely clever lyrics that run through the rap/rock combination of D.Ni.L’s latest single “GLUE” – I’m not the wordsmith here by comparison.  This guy could write circles around me, I have no doubt about it…there are tons of lines in this song that absolutely crushed it; and combined with the brilliant mix & sound of the vocals, along with D.Ni.L’s incredible flow…this whole cut comes out absolutely gigantic and seriously strong.

Consider this, when reading this review, because it’s important to note.  Aside from Rage Against The Machine, I have about as much use for rap/rock as I do for a third tit on Fred Durst.  Like all music, I’m still open to it – it’s just rare to hit the mark and impress me.  The other thing I’d say that was fairly reliable about me that you could count on BEFORE hearing “GLUE” was that the odds/probability of me digging a song that mentions or has a ‘choo-choo’ moment was probably entirely out of the question.  How on earth could a train reference or sound ever be done in such a way that it would make sense in a song right?

Yet somehow, here we are.  Not only does that specific moment deliver one of the most brilliant highlights in the writing & lyrics, but this entire rap/rock combo is without a doubt one of the best I’ve heard from the genre itself.  If you read these pages on the regular, you already know I’ve got no reason to rub the nuts of the music-scene, that’s never going to help anyone…if it’s a compliment that large, take it to the bank and cash it, I mean what I say.  D.Ni.L is freakin’ blessed with options right now overall really – “GLUE” is the lead-single from his third record, called The Boy Inside, AND…dude’s also the guitarist in the high-art music-project known as Wasabi Fire Alarm, which also seriously impressed me when I got my first dose of their style through the single “Two Fingers In A V.”  Side-note worth mentioning…I reviewed that song on April 17th…I can guarantee you that every day since hearing it, likely around early-mid April, I have woken up with that song in my head to start the day instantly, or recalled it within the first ten minutes of being awake.  Point being – D.Ni.L is clearly a man of music, understands its versatility and is using it extremely well to create powerful tunes that make an impact in multiple ways – and “GLUE” is a perfect example to support that.  Not only is it completely different from what we’d heard in Wasabi Fire Alarm, but the song itself makes use of so many tremendously smart shifts in style & sound that you can audibly tell there is absolutely nothing off-limits for this guy…and an endless well of creativity here.  Essentially, if all rap/rock was this engaging, I’d be much more of a fan on the regular.

Because this WORKS.  “GLUE” is ridiculously addictive – the work has clearly been put in here and the results are sonically spectacular, no doubt about it.  Like…just on a lyrical-level alone, I almost want to replace anything I could possibly say here in review with the words D.Ni.L has written and just leave it at that – because they’re seriously awesome.  Musically, composition-wise, this is structured to seriously deliver…and in a true testament to balance in all the best of ways, it’s impossible to pick a favorite between the rap or the rock elements – every moment of “GLUE” is as entertaining as music can get.

Now…here’s where things get REAL for a moment…but this might be important stuff to know/mention.  “GLUE” is largely based on some of the struggles that D.Ni.L has gone through with alcohol & drugs – but more importantly, perhaps more-so than anything else, this single is designed to be a powerful anthem and part of his rally out of the spiral for good.  And here’s what I would challenge D.Ni.L with to think about even more…as proof that the man is completely on the right path in life now…I’d say have a listen to those early tracks and how they compare to the focus he’s got now with a clear mind and vision.  When I hear a song like “GLUE” – it SOUNDS like potential being realized…like that breakthrough has been achieved and though he’s struggled, D.Ni.L has come out completely solid on the other side now.  If making music of this quality and caliber of creativity isn’t motivation to do nothing BUT make music like this all day every day, I’m honestly not quite sure what else you could throw at addiction to beat it.  D.Ni.L’s clearly working with talent that most people would give up everything to have – and although he’s packing in a wickedly in-your-face energy & sound on “GLUE” – there’s also a genuine comfort in knowing that THIS is the sound of an artist that is truly finding their way with confident steps forward.

Music-wise…you gotta admit, this is aces all the way through.  The guitars are crunchy in the hooks, haunting at other times, and overall, just completely wicked to listen to.  The keyboard highlights are perfect additions into the mix, the backing vocals are absolutely insanely cool as well…and that first launch out of the rhythmic rap flowing in the verses into that spot around the 1:40-mark is pretty much designed to blow the rest of what’s left of your mind.  It comes down to exceptional lyrics, brilliant flow, mad-levels of commitment and focus, and clearly, genuine talent to make every part of this work – SOLO as well people, remember that.  Everything about “GLUE” sounds like it would take the effort of at least four top-level musicians to make it happen…yet this enormously entertaining single can all be traced back to the man himself, D.Ni.L – you gotta give this guy credit…there’s not a moment of this song that doesn’t grip you entirely.  Massively impressed with this single…D.Ni.L’s revitalizing the genre with the fresh energy on “GLUE” – what on earth is not to like about this song?  What could you possibly come up with that you’d change or do differently?  This single is bulletproof – a seriously highlight of 2018 so far.

Plus…as if you needed another reason to dig this…the video supporting this cut is also completely badass – check it out for yourself below!

Find out more from the official D.Ni.L website at:  https://www.d-ni-l.com/