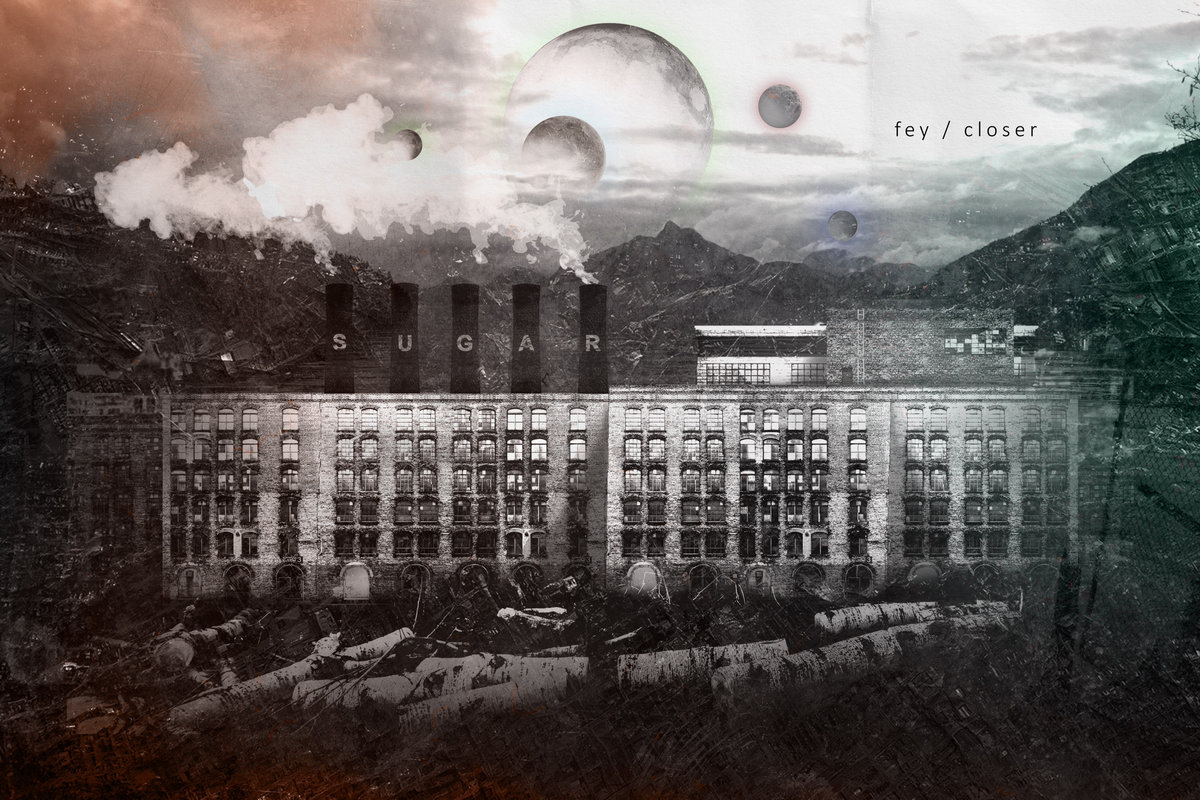 Tell me right now just how many times you can count on your one-hand that TWO of your absolute favorite bands out there collaborate to make ONE record? On Sugar, the split-LP from Vancouver bands Fey and Closer, these two giant entities of noise make themselves known with a brutal-assault of in-your-face rock that makes the most out of every fucking second as it punches and pounds on. Fey is still coming out hot off the release of their debut full-length record Bye Bipolar, which we’ve reviewed here in the past – but as far as Closer goes…these recordings on the Sugar LP are their first in-studio…and many, many fans out there have been waiting in high-anticipation for what they might sound like on a record after playing live for nearly three years solid around Vancouver.

Many of those shows, incidentally, have been played with Fey…the two have traded-places opening/closing and backing each other up onstage in the city-circuit…and it’s awesome to see the strength of that bond continue on into the fruition of this absolutely POSSESSED new-record from all-parties concerned. I can only imagine these two massively epic, hard-hitting and driven bands hearing each other in the studio throughout the recording sessions…and maybe if only in secret or private thoughts, doing their best to continually out-do each other. The way that this LP ramps-up in energy is nothing short of phenomenal…each song packs a massive punch – doesn’t matter which band you choose whether it’s the low-end heavy grunge-rock of Fey’s aggressive approach or the straight-to-the-veins madness & mayhem of Closer…I’m fucking stoked beyond words at how well both of these bands have represented their sound on this record – Sugar is as sweet as an acid-injected cube to yourself!

Each band has their own extraordinarily defined style and the sound of each band compliment each other extremely well as the LP plays through and the two bands switch between tracks. Fey begins the Sugar experience with a track local live-show attendees are certainly familiar with and have been waiting for – the crowd favorite “Blood Flies.” Let me tell you firsthand, I’ve seen the song performed many, many times…and EVERY time…this band and the crowd in front of them absolutely flip right the fuck out and find their tenth or eleventh gear onstage. Here on the record – they have managed to capture the bleeding-energy of their heavy performances at their best, and “Blood Flies” doesn’t disappoint for a single moment. Lead-singer Sam Cavilgia just punishes the microphone and he’s set perfectly into this mix…the way that Fey has come out sounding on the Sugar LP is the way I’ve always heard the sound in my own head…the music has become MASSIVE through the smart mix & production. The beginning of this LP is already as formidable of a beast as you could ever encounter…which almost leaves you scratching your head when you start up a second-listening…how in the hell did it just continue to explode and burn so constantly from this moment and forward? The Sugar LP will eat your fucking face and lick the plate it came served on…its intensity is outrageously constant and on full-display from moment one to the end.

I can argue all day long on behalf of tender, gentle melodies all day long…of which I often prefer myself…but sometimes a dude just has to fucking ROCK and BOTH of these bands have been favorites of mine for years now – again to have them both on ONE record fuckin blows my mind and truly highlights the strength in the underground of the Vancouver music-scene.

Closer comes out swinging, riffing and ripping on the frenetic-frenzy of “New Wave Cult Sanctuary” – one of my favorite tunes from the band when they play live. Lead vocalist Ryan Rutherford surrenders the guitar for the microphone completely when they play this live and basically storms and stomps around the stage and crowd just OWNING the vibe of this song – and again, this record captures that animosity un-caged – “New Wave Cult Sanctuary” plays through brilliantly with gritty, raw aggression. Wicked drums from Tyler Hutton and the guitars from Closer shred wickedly as they riff through their first recorded-epic at a furious-pace and in all of just-barely-over two-minutes of mayhem and monstrous performances that match the level set by their collaborative-partners in Fey respectively.

What do they FEED these animals anyway?

Good lord almighty…the way Fey rips apart your stereo on “Distant Destroyer” should earn every one of these guys a merit-badge of ass-kicking excellence! A seriously gold-star performance from drummer Scotty Miller…the dude is giving his LIFE to the drums in the pulse lining “Distant Destroyer” and fuels the fire as this track continues to burn like audio-napalm. Sam has nailed everything about his vocals on each of these tracks…and again, seriously, Fey has never sounded better recorded; “Distant Destroyer” is a highlight for the entire band…the guitars of Jeff Wang are as sick as we’ve come to expect them to be…he’s created an absolutely killer part here. Nearly heading into the most throat-ripping sounds from Daniel Johns of Silverchair from back in the day…Sam has never been better than he sounds right here on this track. Fey, as a band, is entirely evolving right into the extremely massive and confident entity I’ve always heard in the potential of their music…they should all be so incredibly proud of this record it’s absolutely fucking flawless and packs every bit of the brutal audio-fisting you take in at their live shows.

With a belching squelch of feedback, “Sweet Papa Jhaaa” begins its curb-stomping, city-rampaging audio-grind. Trevor Hutton and his signature guitar tones come ripping through, bending and shredding…dude plays a wicked solo in towards the second minute. The choppy-stutter-stepped beat of both the guitars and drums work wickedly together and the low-end rumble of this tune takes a little more shape as the song expands and becomes a shark-tank feeding-frenzy by the end. “Sweet Papa Jhaaa” has been awful good to us, yessir he has. I love it recorded, I love it live – it’s a rad tune from the catalog of Closer and definitely a wicked choice on their first time out. Rutherford sounds one-step short of the straightjacket-confines through the verse, and the twist on his sound through the chorus is wicked as well – but it’s the character and attitude he’s put into the vocals that have made this recorded version work as well as the live one does. Goddamn exceptional – the ending of “Sweet Papa Jhaaa” fills its sounds with the echoes of presumably many of the screaming madmen that were in or around this recording at the time…pretty sure I hear a Sam C in there at the very least…and I think that’s the neighbours shouting in the background…from like, a city away?

The wicked ending to “Sweet Papa Jhaaa” is the perfect reset moment for the Sugar LP to charge into its second half and second-gear. Fey begins with an atmospherically-intense “Interlude” that serves perfectly to break up the oh-so-willing punishment we’ve been taking from this monster record. Again capturing that ability Fey has to pull you in close before they pull you in completely – that “Interlude” severs itself from its spaced-out melody into “Bleed It Out” – another track that the Vancouver music-scene has been awaiting anxiously to hear recorded. Jeff and Sam are behemoths on the guitars of this final tune from Fey, and the switch they pull around the two-and-a-half minute mark takes this whole song to an entirely new level. After a face-melting grind of gears to a split-second halt, Fey comes back in to a more Deftones-inspired sound towards the end of “Bleed It Out” and Scotty Miller & Sam just go OFF in the third minute and somehow amp-up the energy even further. Heading into a more pronounced-breakdown just before the fourth & final minutes…the final epic explosion is a complete confirmation of the absolutely gripping raw-energy that this band contains.

To end the LP, Closer returns with one of their most fully-realized journeys throughout their noise-rock landscape terrain on “Empire.” The winding & grinding guitars from Trevor, Jake and Ryan all find an incredible groove to work with and April shines on the bass with a wicked performance on this final tune on the Sugar LP. Every bit the ride and electric-energy of their stage-show – “Empires” is a huge beast that shows grit-teeth and sharp-fangs from every angle…it’s complex as all-fuck and to get it this right on their first time out into the studio is more than commendable – it’s straight-up impressive. “Empires” is a multi-layered machine of a song and it churns out extremities in sound with the precision of a wood-chipper in Fargo – it’s a perfect choice for the end to the Sugar LP – and with the blazing pound of Tyler Hutton’s lashing of the drum-skins and Rutherford screaming his madness with a vengeance – it’s all over but the pushing of repeat to crank this right the fuck up once or twelve more times.

Massive congratulations to both of these bands…as a fan of both, this is the record and sound I’ve been hoping to hear from either band…and I’ve gotten it all on the Sugar LP in one demonic dose. I know both of these bands more than well enough to tell them like it is, were the songs to suck…and I’m close enough to punch them in person, even if I would have to run away quickly to avoid a certain beating afterwards if I had to tell them to their face that I didn’t like how this record came out…

…the Sugar LP…was completely beyond every expectation I had for two bands I highly respect and know are capable of extraordinary music…think about that for a moment. I already held them in the highest regard…I’m objective, I’m critical…I’m still me…and I can tell you this is the heavy-rock sound that I’ve personally been waiting for fully-delivered – and you WILL feel the same about the Sugar LP – trust me.

Find out more about Fey from: http://www.facebook.com/feysounds

Find out more about Closer from: http://www.facebook.com/closerbc