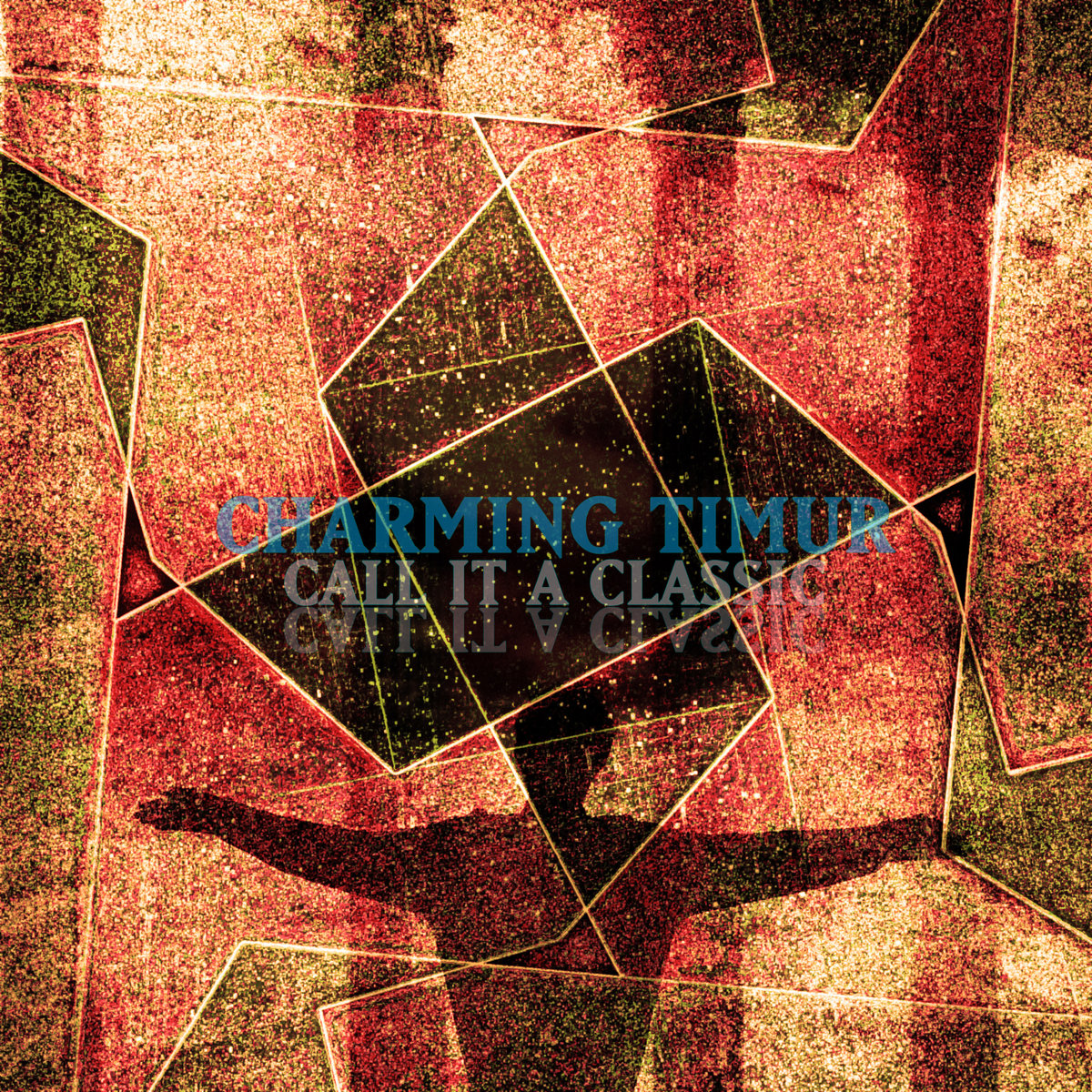 This fucking guy…Santeri Lohi has got to be one of the absolute kings of sarcasm and subtle, wry humor.  I’ve got the added benefit of having interviewed him in both written and audio conversations and also had the privilege of hearing the evolution in his project Charming Timur as its grown over the course of several releases…so it’s in knowing him and his personality well enough that I know he’s meant the title of this record as a sarcastic comment.  He’s long understood the jarring & often disturbing terrain that his music has ventured into…but however niche the audience might be – Lohi has truly managed to stay the course and continues to steer this project into the twisted territory he knows well…and thrives in.

Personally I think when it comes right down to it…as I’ve advised many out there in the independent music-scene – this whole thing isn’t a sprint, it’s a marathon.  Consistency in your art…evolution in your art…offering something unique to listen to…all of these things matter; they might not make you millions overnight…or ever…but they will lead the people to your music over time.  If they like what they hear…hell…maybe they take five years to come back and find you again…but I’m telling ya, true fans WILL seek you out time and time again to check out what you’re up to…and if you’re still around & rocking, maybe it won’t be so long of a gap in between that moment and the next time they check in on ya.

“Birthday Balloon Bodybag” quickly reminds your ears who they’re dealing with.  The bone-cutting sound of Charming Timur is noticeably well-produced here and sounding great in the opening; Lohi’s signature-style filtered-vocals on full display instantly.  Halfway through or so, “Birthday Balloon Bodybag” turns straight-up demonic and continues to savage & ravage to its final hard-chopped ending.  Certainly sets the tone for those unfamiliar with the Charming Timur sound…for those of us that are – you can hear right away that it sounds like the production-values in the music have been sharpened a bit more this time around.  Vocally – he’s bound to forever confuse most ears out there…but Lohi seems much more determined to use it as an instrument in the music this time around.  “OneNightStand (From Ikea)” has the vocals shifting between spots that work and spots that don’t…but overall the idea seems to come out intact.  I felt like the vocals of the chorus came out a little lower in volume than I was expecting…but if there’s an ‘accessibility’ factor in any of Santeri’s songs…you’ll notice it start to creep into the record a bit more from here.  Lead-single “The Best” has multiple-parts that won’t send people screaming in the other direction…you get a solid dose of the Charming Timur sound on this cut but with slightly more definition to each part as they’re played that allow the mind something to grasp onto.  The fantastic guitar sounds that Lohi continues to create are tones he truly owns with confidence…so much of what you hear in the music of CT is absolutely unmistakable…you’d never confuse this with anything else – and again…it’s those recognizable attributes that are going to be what keeps people coming by to check out what the hell else Charming Timur might be up to year after year.

Do I think he made the right choice in selecting “The Best” as the lead-single?  Can’t hurt’em!  But no – he was wrong…and from the moment that “How To Be A Creepy Perv” started out I knew it.  For what you expect to hear in terms of ‘hook’ and something ‘catchy’ in the rhythm to latch onto – everything about “How To Be A Creepy Perv” exceeds expectations.  Definitely one of the highlight tunes in the entire CT catalog of mayhem in my opinion – it’s dank & dark as fuck but it also has a serious amount of rhythm and groove in behind its static-laced danger.  That chorus Lohi!  Brother!  That’s fucking rad as it gets and the transitions between each part in this song came out clearly defined, making for a wickedly versatile and dynamic listening experience.  Huge fan of “How To Be A Creepy Perv” – the use of samples and how this track goes from the intensity of hooks to the wildness of samples and straight into the bizarre by the end…I thought this song’s construction was strong as cold hard steel.

Wouldn’t be fair for me to take shots at Lohi’s madness in this review without taking a few shots of my own…so here we go, here it is for ya – I’m predictable as fuck and he KNOWS it.  He already knows I’m gonna like “Keep You Safe” before I’ve even heard it I’m sure, because it’s built on a truly strong melody.  Another highlight example of the Charming Timur sound refined & smoothed out a bit in comparison to his usual chaos – he sings it strongly, the music is captivating…if anything, “Keep You Safe” was too short.  I felt like “Funeralblossoms” kind of takes that melodic-energy a step further – it’s even more subdued than “Keep You Safe” at first.  Throughout the first three-minutes I was relatively convinced that Lohi was playing the writing of “Funeralblossoms” a little more on the safe-side than I’m used to hearing from him – but I thought the final switch and added aggression in the final ninety-seconds managed to evolve the song at just the right time…he ends this one strongly.

I’m not 100% positive but I think the words to “MerryGoPostal” are something like ‘I love fuzzy bunnies, I’m so thankful for Adam Sandler movies, Peaches and world-peace are my favorite things’ – I could be slightly off on that though.  Okay…chances are I’m probably a million-miles off the mark on that assessment…come to think of it…these might not be words at all and just tortured screams…  “MerryGoPostal” is built on everything that happens after midnight in a post-apocalyptic world…it’s big & beastly for its short length and definitely geared towards those out there that really like ‘the hard stuff.’

For the rest of us…us more melody-driven folk…we’ve got one of the most accessible sounds I’ve heard from Charming Timur to-date on “My Days Don’t Start.”  Vocals maybe a bit too loud in the chorus on this tune…but other than that, loving what I’m hearing here in the idea itself – the verse might be one of the strongest I’ve heard in Lohi’s music.  Inarguably, it’s much less chaotic and more minimal in the verse than you’ll typically find him to be…but perhaps the overall sound in how this came out at the end will lead him down more similar paths in the future.  It also allows for real depth and contrast between the parts he’s written and really allows the music to expand dynamically and explode like it does just past the 2.5-minute mark.  Strong tune for sure…and a great combination of what we know from Charming Timur meeting that next phase in its evolution and development in combining melodic atmosphere into a more controlled chaos.

Sometimes I sit and listen to Charming Timur and think about what it would be like to just sit in a room with this guy.  Like…you’re watching TV or a movie…everything’s quiet…then all of a sudden he just flips-out and starts screaming demonic sounds like you hear on “Boiling Rain.”  Imagine that scenario and the brown stain you’d probably end up leaving on your couch as a result.  INTENSE tune…I actually ended up thinking “Boiling Rain” was one of the stronger cuts on Call It A Classic even though it’s a bit more removed from what I personally listen to.  I thought the ideas that fuel the middle of this tune forward really had a satisfying crunch to them and I loved how the song itself seemed to go on and continue to explore the far reaches of its own sound by the end.  “Boiling Rain” actually becomes quite the journey…if you can brave its gnarled, gnashing teeth & claws, I think it’s one of the record’s strongest tunes and it proves to be rewarding to listen to, experience and live to tell the tale that you survived it to your grandkids one day.

Seems to be a lot of post-punk melancholy melody that is in the subtext of the music this time around…I think you can hear that rise-up again in the writing of the verse of “Island Of St. Benzo.”  After the verse I don’t know what the fuck he’s doing…our boy Lohi has descended straight into the pit of madness here on this tune and it’s not until it hits nearly the two-minute mark before he snaps back into cohesion.  It’s like he sat there in the studio, started recording, had an out of body experience, possession or began talking in tongues…and then the trance ends instantly and he kicks ass for the final fifty seconds like NOTHING EVEN HAPPENED only moments before when he was tripping right out!  Say what you want…that’s cool as shit…”Island Of St. Benzo” was a wild & memorable experience in this set of songs.

Overall the album does seem to explore a more defined melodic-objective…and I think the result is a multi-dimensional record that might end up drawing in a few more people to listen than his past work.  I suppose round most parts, they call that artistic evolution…and I think Santeri’s managed to convince me once again that his music continues to validate its own existence.  “Save Money, Perform Your Own Surgery” isn’t JUST a great song-title…it also has some of the best guitar parts written into the music on Call It A Classic and as the longest tune on the record it also benefits from some expanded depth and exploration into each moment and idea as they pass.  “Save Money, Perform Your Own Surgery” has Lohi sounding great on the mic…highly unique as ever in comparison to anything else you’ll hear out there in music…and of course, don’t let him fool you with the soft-sounds of the opening – this tune explodes solidly in the chorus.  Great contrast in between the two main parts of this song though…and in behind the murk of the mask of the filter on his voice, “Save Money, Perform Your Own Surgery” will give you just enough of a reminder that the man CAN sing.  He chooses to add the psychotic-blend to his vocals…and truthfully it’s part of the Charming Timur sound – BUT…just remember in behind there is actually a man that can hold his tone and hold his own, know what I’m sayin’?

There have been some real highlight moments on Call It A Classic…maybe the name wasn’t as sarcastic as I’d first assumed after all.  “How To Be A Creepy Perv” continued to hold-up and be a standout for me every time I repeated the record…”Keep You Safe” and “My Days Don’t Start” were all impressive and new twists to the Charming Timur sound that really worked well too…and right at the END of the record, one last final gem in the form of “Solitude.”  Another massive standout…Lohi’s got everything slowly coming to a boil here on “Solitude” and the swirl of the mix as it continues to envelop you is just as full of good ideas in the music itself…towards the very end of the song/record, he’s right on the edge of ‘space-rock’ as the guitars rage into an ever-expanding finale that ends Call It A Classic on a huge high-note.

He sure has a thing for that hard-chopped, cut-off style kind of ending to his songs though.  Sometimes I have to sit here and ask myself how he’d feel if I did that to h