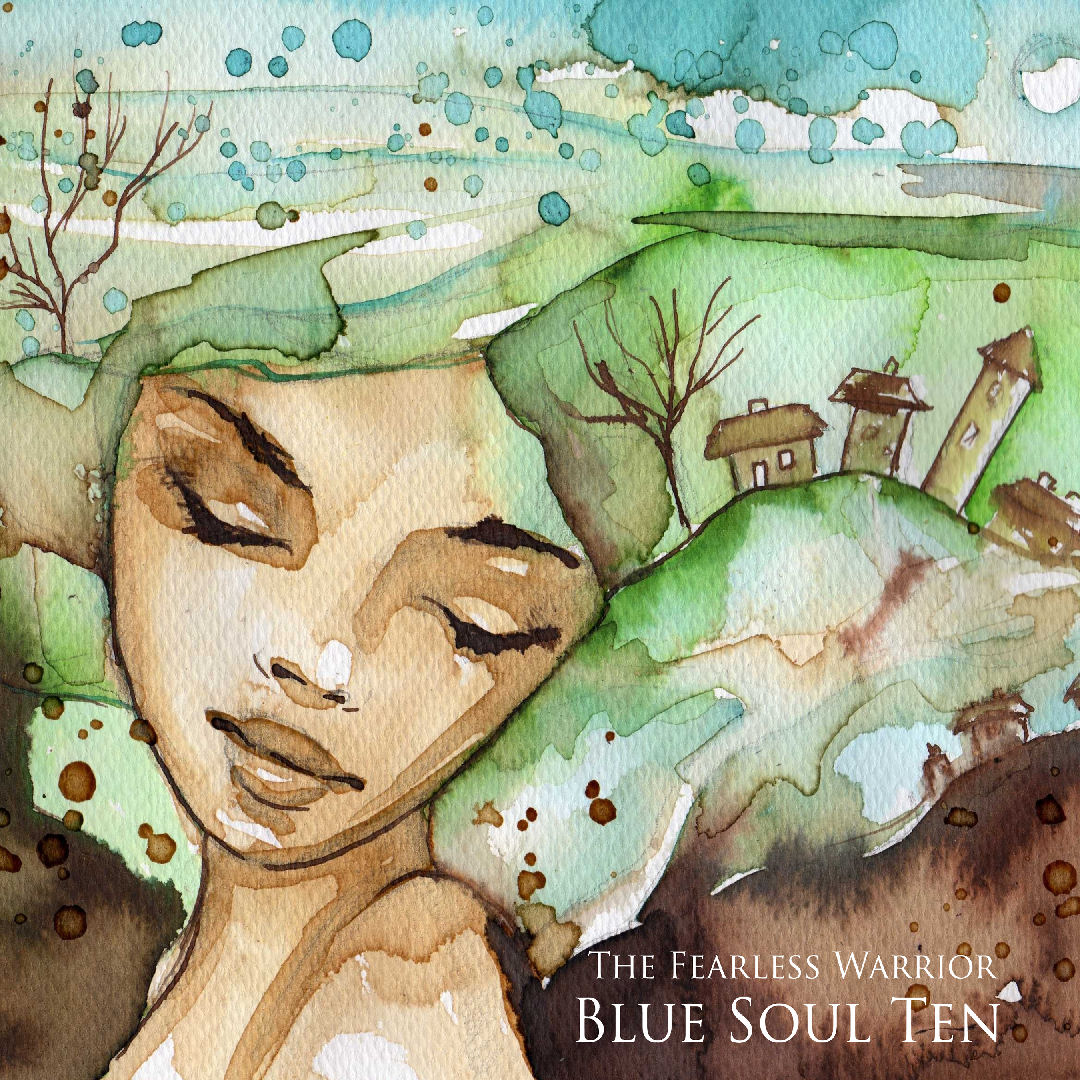 I love stories like these…they give me some hope!  Blue Soul Ten is the resulting combination of talent & experience that Claye Greene gathered behind the scenes before stepping out into the limelight himself.  Always inspiring to hear a story whereby the feeling/pull of music is too strong to let an artist stay away or behind the scenes isn’t it?  I think so.

And like many artists/bands that have been in a situation similar to that…once they get there, write & record…you start to wonder whatever on earth was holding them back!  I mean…that’s a seriously inviting rhythm & groove on the opening/title-track “Fearless Warrior” – when I hear something assembled, produced & performed with as much instinct, skill, professionalism and precision like this…it really does make me wonder what kept Claye Greene out of the spotlight for so very long.  When I hear something like this and how it all comes together as perfectly as it does – it honestly brings a smile to my face.  While he might have been behind the scenes for years and years – he’s here now…and you can hear from the music & production on Blue Soul Ten’s The Fearless Warrior that he’s fully embracing this moment and taking hold of his destiny through the confident structures & assembly of this record.

Starting the record with a smart vocal-sample & atmospheric-elements providing the intro, “Fearless Warrior” breaks into a completely smooth sound and jazzy-beat and instantly satisfies.  It’s the kind of groove that’s executed with such a dedicated level of professionalism and smarts that the moment you put this on…no matter WHAT you were in the mood for – this STAYS on.  You could have been hoping for death-metal or country-music – and I’m telling you that you’d STILL keep this on from the moment it starts.  “Fearless Warrior” has that much pull to its rhythm & groove, structure and execution – this is the kind of captivating & charismatic opening to a record you need outside of the typical mainstream genres…this will grab the people’s attention.

Blue Soul Ten instantly follows up a tight & right beginning to the record with the percussion-led sounds of the dreamy music in “Symbols.”  I like how real everything sounds despite likely mainly coming from electro-samples…things like the saxophone solo within the atmosphere of “Symbols” provide real depth to the atmosphere and definitely help set the mood.  It’s got nearly a sultry Sade-esque sound overall throughout the beginning – and I loved how this cut finds one extra gear to kick into at about the 2:45-mark and adds in the perfect surroundings to make this song sound full, developed & explored…and straight-up magical.  If you like Peace Orchestra or Thievery Corporation…a track like “Symbols” fits right in line with your taste exceptionally well.

How do you resist a combination of a walking-bass-line and insightfully-prepared electro like “Blue Moon?”  Actually…don’t answer that…I don’t want to know.  What I do want to do, is eat this track by the bowlful for breakfast, lunch & dinner – “Blue Moon” was a seriously inspiring listen from an audiophile’s perspective…everything in the recipe here is clear & crisp in the mix and serves an overall purpose in the composition.  Blue Soul Ten scored a big winner with me on the ingenious combination of sound, depth & textures on “Blue Moon” – love the production, love the beat, love the rhythm of the vocals and especially loved the surrounding atmosphere of this tune.  “Blue Moon” ticks all the boxes in the win column for creativity, accessibility and execution.

Seriously…you can’t help but be impressed by what you hear on this record.  This dude absolutely THRIVES in a chilled-vibe; as the album continued with “Unafraid” I couldn’t help but think to myself immediately that I was indeed, listening to a highlight from The Fearless Warrior right at that very moment.  I loved the spread-out sound, well-timed sounds of “Unafraid” and how this track built & evolved…a MASSIVE pleasure to listen to a song develop and explore itself like this.  From the sparseness of the opening to the insanely-effective piano-line hook that subtly drifts into the mix, the beautiful sound of the vocals, the smart guitar samples & solos, the saxophone…I mean, you name it and this track, the longest cut on the entire record, completely has it going on.  Love how he lets that last note in the piano-line hang for just a millisecond longer than the rest and how well it fits…that’s genuine feel, authentic instincts and incredible execution right there is what that is.

With the additional vocals he’s added to this record and the chilled-nature of the beats created, a lot of it also comes out sounding as punchy, rich and full in the atmosphere & textures as a band like Zero 7 in their instrumental work.  “Daydream” is a perfect example of that…you still get the hooks assembled from real sounds but all structured and combined with an insightful electro-edit.  LISTEN to the guitar-line hook in this cut and tell me it should work if you heard it on its own!  You’d probably think Greene was NUTS to build a track around it until you hear how well it works and sets the tone on “Daydream.”  The vocals and synth adds to this cut made the atmosphere really work perfectly – and extra credit to the beat itself in this tune…the vibe in this song is smoother-than-smooth.  Again…I know I’ve said it already…but I think it’s honestly impressive to know that a jazzy sound like this can be executed with such style & skill…I just think from the moment The Fearless Warrior starts to the moment it ends it charms and captivates completely through its flawless design and I can see many people jumping aboard the electro-jazz train just from listening to this record.

Largely because Blue Soul Ten never quits on ya.  No matter what point or corner of the record you find yourself on, there’s something creative and unique to listen to.  “Position” makes use of a well-pronounced bass-line & beat amongst lighter, airy sounds in the electro-additions and also has more actual words in the singing-parts than we’ve heard on the record so far.  What can I say?  This WORKS.  Love the way the vocals sound on this tune, love the way they’re recorded and where they sit in the mix just in behind the boldness of the music…love the way the synth-strings and sparkling elements in the music add the perfect amount of contrast to the low-end.  “Position” moves at a sleek pace…and for the most part I’d say we’re listening to another completely solid assembly from Blue Soul Ten; there’s a repetitive part in the piano-hook that I think works better at some points of the music than it does in others…but that’s a minimal observation and critique at best.  Chances are, after everything I’ve heard landing solidly in the win column…with additional repeat-listens those spots will grow on me even more – I have no reason to question the instincts and skill in the writing of the music of Blue Soul Ten.

Really dig on the additional poetic-nature you can hear on “Incertitude” – overall, it’s a fantastic combination of rhythm and art.  The pacing works perfectly once again…a bit mellower of a tune until just past the halfway-mark when the beat kicks-in – and even then the relaxed & invitational sounds of “Incertitude” still reign supreme.  Greene’s got great ideas on how to mix vocals and insert them into the song in ways that really help strengthen or supply the melodies we hear…he’s done a great job on this cut without exception…everything we hear slides right into the groove with ease.

“You Are” was probably the track I had the hardest time accepting overall – but there were still plenty of moments of redemption and value throughout listening to it.  I like the atmosphere & texture of the vibe for the most part…it was just that one final layer of additional synth-keys that I found to be a bit on the clunky side of life.  Similar to “Unafraid” in the sense that he’s got a couple notes on lock just slightly behind the beat…this time around on “You Are” it didn’t have the same effect for me.  “You Are” has lots of time spent without it in a solid percussion & bass groove…but by the end that synth-hook has attempted to dominate the rest and it’s hard not to hear its purposely-awkward approach.  Of course, in complete contrast to like, EVERYTHING I’ve just said, it’s also hooks like this that seem strange to our brains that tend to get stuck in our heads all-week long afterwards.  So…I’ve got slightly mixed feelings on this one…those keys are certainly plunkin’ away…something about the execution on those and where they sit in the mix just seemed less focused than we’ve heard so far on this record by comparison.

While I’m uncertain if “Rain Dance” would be as big of a hit out there with the people as it was for me…personally, I couldn’t get enough of this song.  The way that Blue Soul Ten has formed the opening of this tune with its spread-out sound and incorporating the authentic rain-sounds into the fabric of the audio-texture is a truly wonderful thing to listen to.  The vocals come in strong, confident and angelic in tones, fitting the energy and mood of the music perfectly both before and after the beat kicks-in.  I like moments like this on a record…I think Blue Soul Ten really makes that concentrated effort at creating art in music and it shows tremendously on tracks like “Rain Dance.”  The production is absolutely crystal-clear and intensely captivating…you feel like you hear every single raindrop as they fall and the solitary piano notes & saxophone sounds in the background turn this atmosphere into a truly extraordinary moment in time to listen to.  I still enjoyed it once the beat kicked-in and the vibe lightens-up…but I’d definitely be lying if I didn’t mention that when it came to “Rain Dance” it was truly about the outstanding way Blue Soul Ten approached the beginning of this tune.  “Rain Dance” plays like an authentic part 1 & part 2 combined and it works well as a whole for certain…but MAN…those rain sounds though!  Amazing!  Felt like you could have heard a pin-drop in this studio and like I wasn’t even breathing while I listened to the first two-minutes of this tune to make sure I listened to every single sound it had to offer.  It’s a much more artistic track for sure – but I think by the end, anyone on the fence about the opening will fall cozily onto Blue Soul Ten’s side of the yard.

Ending the album on its shortest cut “Blue Theme II” – Blue Soul Ten wraps-up a solid experience in listening to The Fearless Warrior with a wild blend of many of the signature sounds in his electro-jazz infusion that have made the album dynamic & versatile to listen to at every moment.  Smooth percussion…great low-end sounds meeting those bright-contrasts in the surrounding elements in the music and piano-keys.  For all of two-minutes-plus, it’s pretty avant-garde and definitely jazz at the root of its core…but uniquely & complexly composed in a way certain to catch the ear.  “Blue Theme II” might actually be one of the more bizarre ideas on the album overall – but I think it really makes a statement right here at the end about the freedom of expression in music and how you can take it in any direction you truly want to go.  I like the wandering-nature of the piano-keys in this tune personally…and I like how “Blue Theme II” really emphasizes that relationship between art & music to provide a memorable and solid ending to the journey we’ve been on with The Fearless Warrior.

Find out more about Blue Soul Ten at the official page at Facebook:   https://www.facebook.com/bluesoulten