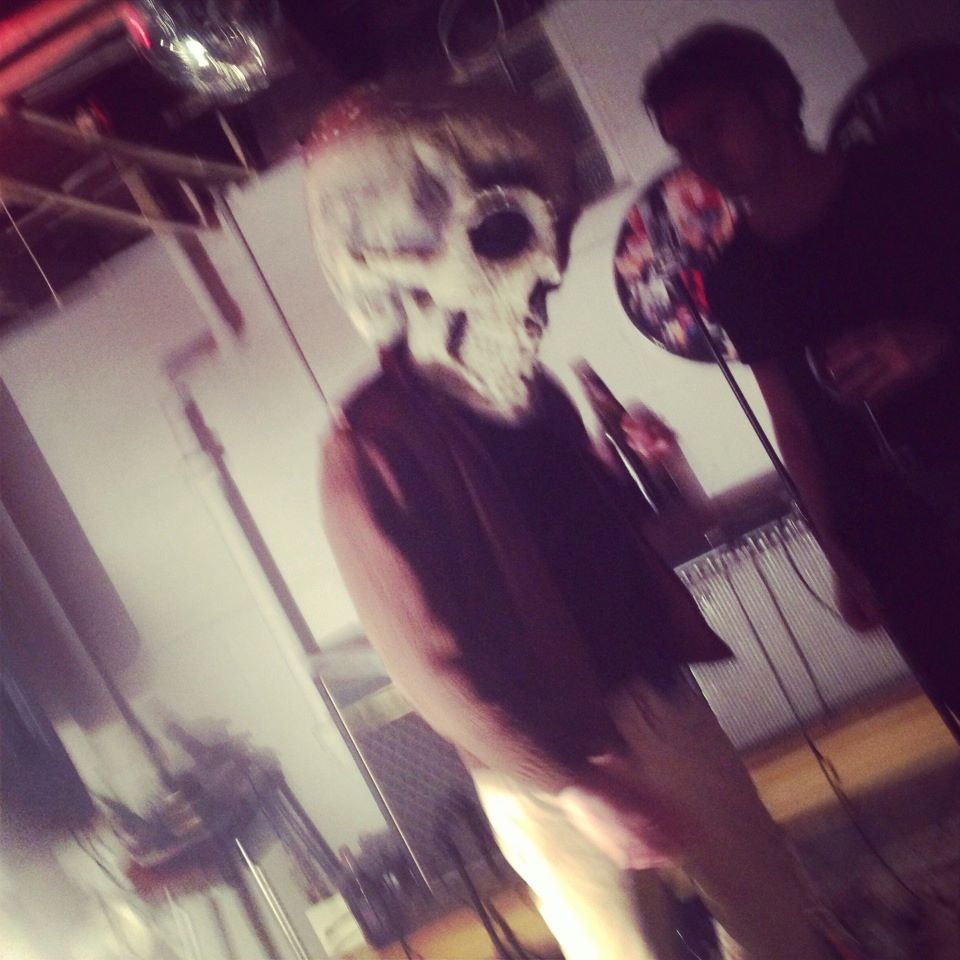 Just so happens…I’m a huge fan of The Black Angels, thanks so much for asking! Hmm…ok…wait…no one asked you say? Well…whatever…being well-versed in their dank, fuzzed out riff-rock is going to help me out in this review on Birthday Noose today…I can FEEL it! It is impossible to ignore; fans of The Black Angels would love this music on Hang’em High…the opening of this EP puts out such a similar vibe to the sounds of how TBA started out their Passover album. Distant & far away vocals trip into the mix amongst the wall of fully enormous sounds from the distorted guitars and loose-feeling drums all jamming it out, subtle-switches ripple through the song, but “Keep Tripping” is an all-out mellow-assault from moment one and really pushes wicked sounds from every direction. I dig lo-fi recordings like this…it has a grunge/psychedelic aspect…it feels DIY because of the way it sounds production-wise…or at least most would assume that it would be – I’d disagree on that…I can’t be completely sure, but to me there’s an expert hand on the studio-boards helping guide this EP to its fully envisioned overall sound.

Whatever the case might be…”Head For The Hills” certainly confirms that Birthday Noose is heading in the direction they’ve led you in from moment one. Another hollowed-out set of vocals put into the swirling atmosphere of BIG guitars that find a wicked riff that carries both the verse & chorus – again, the comparison to The Black Angels is impossible to ignore – but can I just say how HAPPY that personally makes me? TBA is a band that should have gotten a lot more credit for what they do, and of course, The Thirteenth Floor Elevators need credit for a lot of where they got their ideas from…but aside from these two masters of psyche/rock, let’s face facts – there’s not nearly enough of this music done RIGHT. While there might be moments where I still might feel like, if anything, this would be closer to the earlier-side of the material of either of those aforementioned bands – you’ve still gotta take that as an incredible indication of where Birthday Noose might just find themselves one day in the pages of rock history. In my catalogue…on my playlists and certainly through my speakers daily – there is ALWAYS time for music that sounds as raw & REAL as the Hang’em High EP does…honestly, I fuckin LOVE this. “Head For The Hills” has all the thrashing psychedelic rock you can pack into a song, great energy and they push the mix in all the right directions – it smoothes-out perfectly just before the end…like a cheeky little nod to the fact they could be recording this all in much more accessible ways for you to hear and are completely choosing not to.

Or as I’d like to put it – Birthday Noose has a commitment to their sound & style – and it’s uncompromised as all-hell. You’ll dig it or you won’t…sometimes that matters to me a lot more than it does right now…right now all I can concentrate on is the volume on my stereo…as this EP continues on and “The Clap Song” starts in, I just want to figure out how to get this like, SO LOUD that the next town over starts to actively complain in their city-council meetings. To be truthful, I think overall I dig the previous two-tracks over this third, but at this point the captivating rock-vibe from Birthday Noose has completely taken hold and forced my hand to try and turn the volume knob to the farthest reaches of the right side. Very effective rhythm & groove in “The Clap Song” – you can hear they haven’t over-complicated; they keep it simple riff-wise so that even at the craziest-of-crazy mayhem-moments, it’s all stunningly clear in direction despite its ever-rising, crushing wall-of-sound and distorted-assault.

Of course, the danger of sounding anything close to The Black Angels is that the overall scope of listeners is a very niche one…freaks like myself…THOSE kinda people. Believe me when I say there’s enough of us out there to support this music in-full – but as for a mainstream sound…I don’t know if there’s ever to be a hope in hell for this style to ever dominate the charts. That’s never been important to me – that’s why I’m here in the independent scene, where the better music IS. And if what I’m saying is anything close to true – this is where you’ll find me for years to come; discovering music like what’s being made here on Birthday Noose’s Hang’Em High EP is exactly why I do what I do. I don’t think songs like “Walk Without You” will stand a huge chance against the general population’s musical-tastebuds – but I think you can also hear in Birthday Noose’s commitment, confidence and stylistic approach that they’re making the music they LOVE and that they want to hear themselves…I’d be surprised if this band was even aware that there IS a mainstream – it completely sounds like they just do what they do, regardless of anything else going on around them. And again…I love that. “Walk Without You” won’t be finding its way onto radio anytime soon – but if you know anyone that’s worth their weight in the salt of cool, they’ll fully have this blasting from their stereos proudly.

If anything…I would have cut this EP right there. As much as I dig the vibe from the last-cut “The Cure Song,” I think the switch in the overall sound to a cleaner, more-pronounced sound kind of hurt the end of Hang’em High a little. It’s bizarre really…I’m not quite sure I can explain it other than to say it’s the kind of situation where you’re in the mood for the sound of the first four songs, or the fifth and final completely on its own on repeat – but the odds of both of these moods mixing I think is actually a little more widespread than they might have given credit. It’s a good song…perhaps even a great one…but in terms of cohesion for this EP, I think this final-cut might have found better success on a separate release. Though it shows another aspect of the writing, style & sound of Birthday Noose, I’m gonna have to make it official…I think “The Cure Song” should have either started this EP or found itself another home for the time being…but on the flipside, it does excite me to know that there’s still a lot left in the tank of ingenuity & creativity for the band to explore in the music of their future.

Because for fuck’s sake…I sure hope a sound like this continues to catch on & spread. I love this style & sound…the understated, burning-aggression in the music. It all sounds like the perfect release of controlled-fury and a genuine desire to fucking ROCK – I already can’t wait to hear what Birthday Noose might come up with next, these guys are killin it.