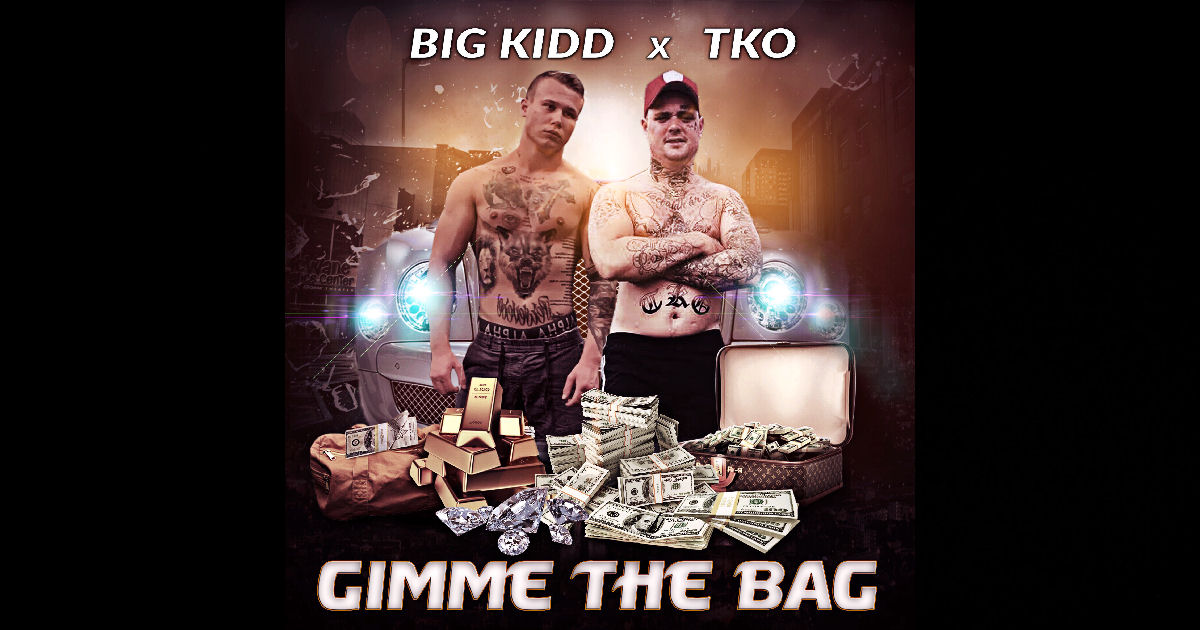 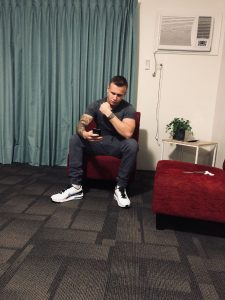 Without a doubt one of my favorite rappers from the land down under…but I highly suspect as well that if I was to sit down & examine a whole list of my favorites from all over the globe, I’d still find BIG KIDD’s name in bold somewhere up there at the top.  Not much out there quite brings a grin to my mug like listening to this fuckin’ ferocious emcee spit bars – sure BK’s always on-point & has precision flow – but the sheer magnitude of this dude’s tone of voice is so magnificently MASSIVE at all times on EVERY single we’ve heard from him throughout the years, that you literally can’t help but feel the force of his words as they pump out of your speakers straight atcha.  His confidence on the mic is so powerful, so huge, and so BIG – he’s been eatin’ the lunches of just about every other emcee out there, straight-up.

Enlisting the A-list talent of TKO on a collaboration for a cut they’re calling “GIMME THE BAG” – these two emcees go straight to work, establishing the seriousness in the vibe of this killer single.  Smartly laid out…I think it was a good move to have KIDD bring this track home after having it start off so impressively with the bars TKO lays down – between the two styles of each individual man on the mic, the structure of how they appear gives this cut the ability to expand & explode.  “GIMME THE BAG” has the advantage of a wickedly hypnotic sound sample & beat to begin with – but it’s definitely the way these emcees handle their business on the bars that makes all the difference here.  TKO’s got a stylistic slickness and confidence that hits the mark for sure – dude’s got grit in his voice and an attitude you can hear…which you gotta admit, you’d kinda assume an emcee would have to have if they’re gonna hang out with BIG KIDD, right?  Point is, TKO’s a great fit to take on that first verse and land the initial punch that “GIMME THE BAG” creates – he spits smooth but he hits hard, armed with deadly lyricism, finesse & precision…which is exactly the kind of skills & energy you need to bring to a collaboration with BK.  TKO flexes a personality & charisma that stays memorable – which is impressive in itself, considering it’s likely always going to be the extreme volatility that BIG KIDD brings to the mic that’s going to make the BIGgest impact here with listeners due to the explosive sound of this human-volcano.  Point is, they make their own moves and have their own thang goin’ on – and each ends up complementing what the other brings to the mic on “GIMME THE BAG” – you just can’t help but feel the sheer force of BK’s verse & bars coming through your speakers, because that’s WHAT HE DOES people…that’s signature BIG KIDD.  If you can’t actually FEEL the airwaves hitting you in the face when you’re listening to his music, then you’ve got your sound turned ALL the way down – cause even having this dude up on ONE of your stereo’s volume is like the rest of the world’s emcees on ELEVEN.  Dude literally generates electricity when he spits.  Hearing him detonate with that brutal raw power he brings to the mic in such a punishingly perfect way on “GIMME THE BAG” was that audible hit of the good-good I needed for 2019; definitely an effective collaboration I can get behind, with two highly talented & wildly capable emcees on the mic, and a flow to the whole structure of this single that pumps out more intensity by the second.

Sometimes I sit here and wonder if BIG KIDD is simultaneously squatting fifty reps of a full metric-ton of weight on his shoulders at the same time as spittin’ out these rhymes…you gotta admit, it COULD BE a POSSIBILITY.  Dude hulks out on the mic like most emcees could only ever dream of being able to do; if you think Eminem has got venom in his voice, believe me, you literally haven’t heard anything close to the level of savageness you’ll find in the music of BIG KIDD – “Roger That” homies?  From the moment he starts to rip into these bars, he never stops – serving up line after line of ice-cold classic BIG KIDD, fully demonstrating the BEEF this dude brings to the mic, “Roger That” proves what a lyrical assassin the man can be at max-strength.  He’s like the John Wick of the Rap game y’all – pay close attention to this single (or a couple others from BK’s catalog for that matter) and you’ll learn all about what’ll happen to you if you go fuckin’ with his dog.  Consider the reference I made for ya – John Wick – it won’t be pretty.  All fun pop-culture references aside, for real yo, LISTEN to how this dude covers all the angles – how the words connect so perfectly, how the editing on the track is fuckin’ immaculate, how the layering of the vocals makes a giant impression, how the slight breaking-up of the beat at pivotal times makes his voice come out even LARGER somehow than it normally does!  “You don’t want these problems” as the digitalized hook will inform ya…as if the murderous tone of voice of BIG KIDD didn’t already let you know; I’m just endlessly thankful his cuts fuckin’ CRUSH so damn hard…cause what in the all-hell is a tiny guy & puny mortal like myself even gonna SAY to this guy if they don’t?  “Excuse me sir…ummm…Mr. KIDD?,” and tap his shoulder politely, suggesting he change a thing or two?  Hopefully that day never comes…I’m pretty sure this dude could punch me out into next Tuesday just through syllables alone.  BIG KIDD is synonymous with literally EXTREME entertainment at all times – make no mistake, even though there’s a good chance he doesn’t know you personally, there’s an even better chance that you’ll hear a track he’s made like “Roger That” and just assume he’s gonna murder you one day anyhow.  It’s thankfully due to the grin on his face like you’ll see in the picture below, and references he makes to his faithful hound that you know there’s still a heart beating somewhere deep down in this thug when he’s at his most vengeful on the mic like this, otherwise you’d likely assume he’s out rampaging his way towards your village at this very moment. 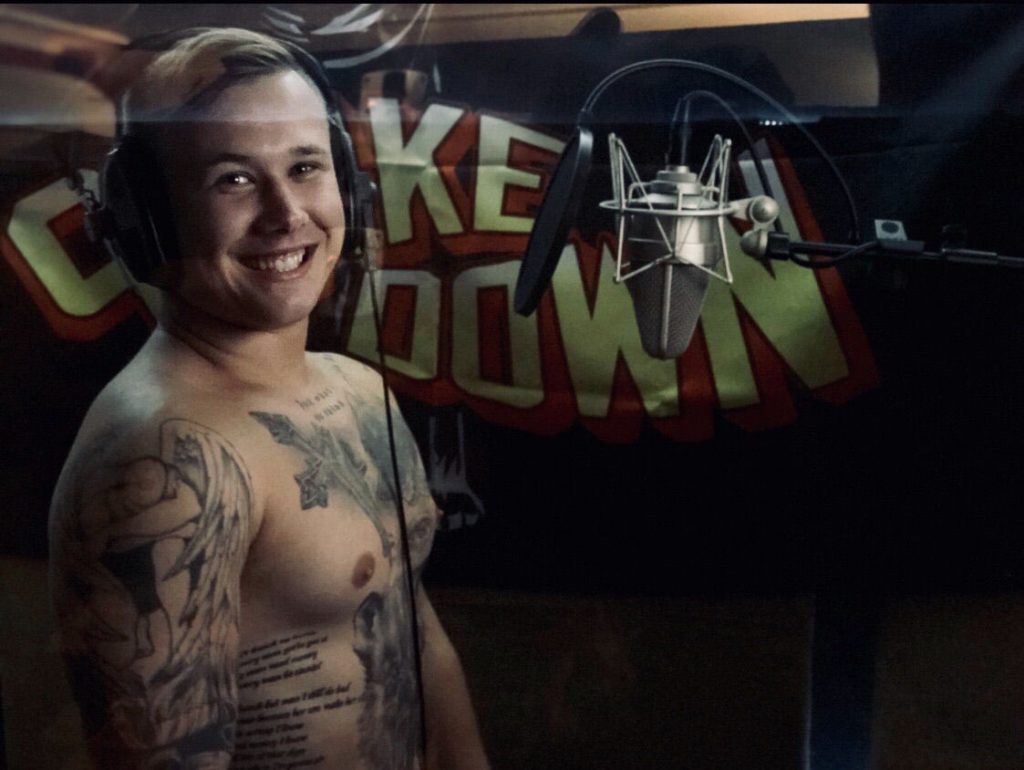 I love the notes I’ve got that come with the final cut I’ve got here called “Trappin’” – they read:  “Just some real bars” – that’s it, that’s all.  As promised, he certainly delivers – as if that was ever in doubt whatsoever.  I can admit he likely makes a bigger impact with the two previous cuts, but the quality of what this guy brings to the mic literally & audibly NEVER drops.  He’s explicit AF and there’s never been a single moment where I’ve ever heard a BIG KIDD cut that doesn’t say exactly what he wants to say, exactly how he wants to say it – and “Trappin’” is definitely no exception to that rule & standard.  Takin’ on the fuckboys out there with hard-hitting bars that aim straight for their target with the raw-power you know & love from BIG KIDD…he’s SLIGHTLY more in-control of the rage here perhaps, but lyrically, he’s still packing just as much of a punch as ever before.  He’s “goin’ in like dicks and pussies” here on “Trappin’” – or in other words, a perfectly tight fit to the walls of this beat.  From what I can see online, “Trappin’” was one of the first cuts he released this year…and you can obviously hear from the relentlessly savage grip this dude has on the mic that he’s been slaying 2019 from the very beginning.  BIG KIDD leaves a crater behind wherever he goes, I swear…”Trappin’” is about as low-key as you’ll hear him, and he’s still way beyond the level of aggression, mayhem, and madness you’ll find in any other emcee out there in the Rap game right now.  Dude should be seriously proud of what he’s already accomplished with his career, these new songs included of course – the facts are facts, BIG KIDD has more signature style & identity punching boldly out of his music than most ever will – and it’s addictive. 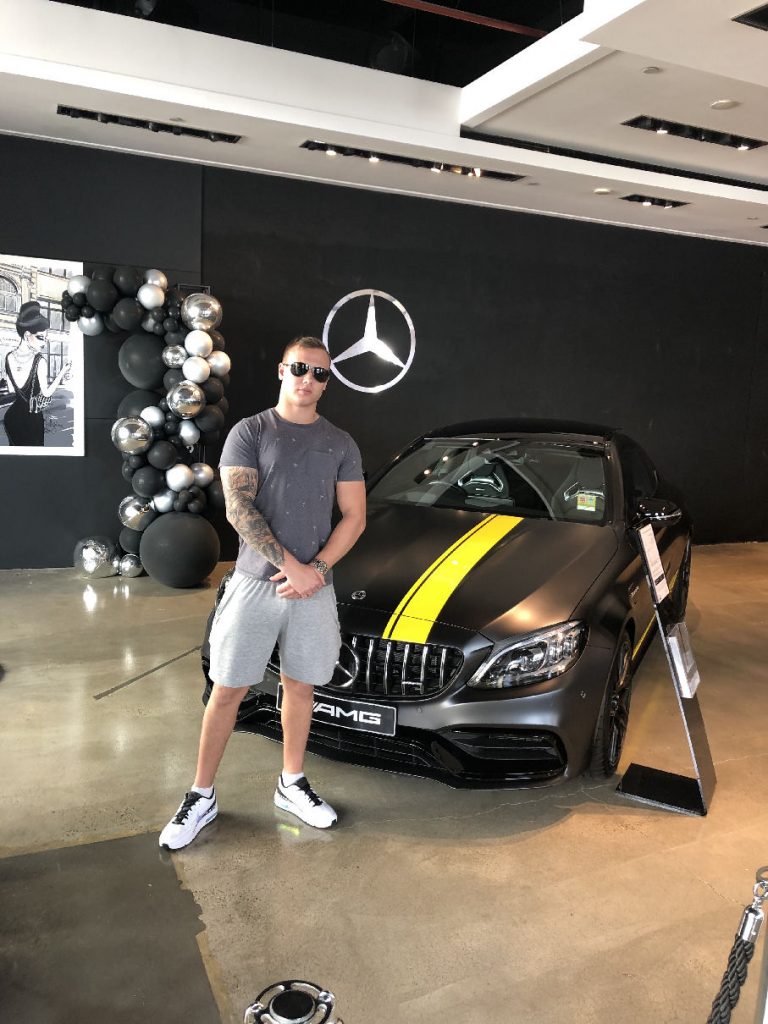 Find out more about TKO at: