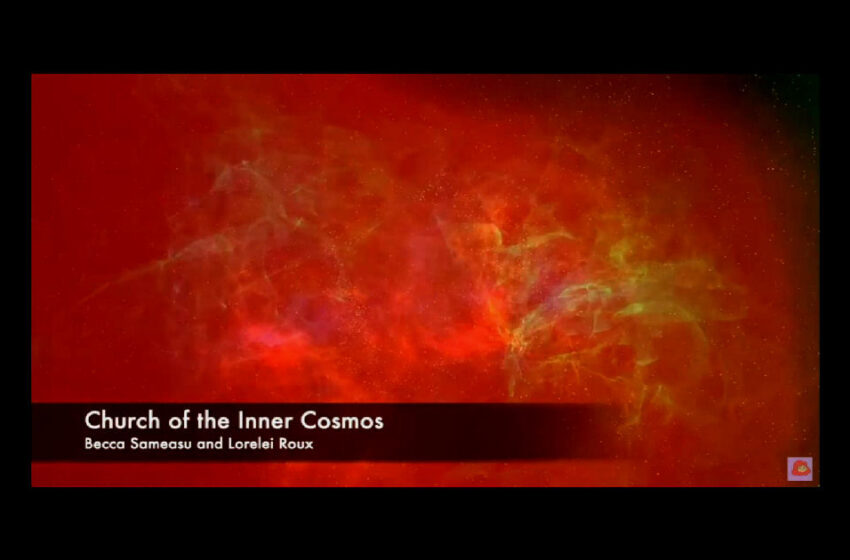 Interesting tune, no doubt about that.

Word on the street is that “Church Of The Inner Cosmos” was released on “a discordian artist compilation earlier this year” – and I’ll fully admit, I had to look that up.  I’m never shy about a little bit of learning with the music I’m listening to, especially when it sounds like most people would need a dictionary to understand what’s happening in the lyricism…which is a possibility here for sure.  Apparently…for those of you that don’t know about stuff as much as I don’t know about stuff outside of music…”Discordianism is a religion or philosophy/paradigm centered on Eris, a.k.a. Discordia, the Goddess of chaos.”  At least in the world according to Wikipedia…if you’re looking at Urban Dictionary they’ve got a whole different set of ideas as to what Discordianism is all about.  Anyhow.  Cool with me – I’m not quite sure I fully understand how the lyricism of “Church Of The Inner Cosmos” necessarily ties directly into that, or if it’s just a sound/vibe that fit the compilation…but as I’ve already indicated, I really do understand very little in life.  I just know what I like to listen to folks, which is what landed me here.

So what I’ll say is this…y’all know that anything outside of the norm is probably going to get my attention, and justifiably!  This whole planet does wayyyyyyyy too much of the same damn thing disguised as something different…so when I do find something unique like what Becca Sameasu has written and Lorelei Roux has performed/produced…sure…you betcha…I’m interested, and genuinely intrigued.  Just so ya know…you CAN be those things, even if you never feel like you fully understand what’s goin’ on…in fact, I completely recommend it.  Jump on out of your comfort zones for a moment or two y’all…ya might learn something!  Picking up a piece of this or that here & there in your travels is how we evolve, grow, and expand dear readers, dear friends…I have the feeling that Becca and Lorelei don’t mind us being curious more than we might fully ‘get’ a song like this.  In their own way, no matter what happens, with each listen, click, and view of their video…like it or not, they’re expanding our minds – and I salute that.  Full respect from me, yes indeed.  Plus I love Spoken Word stuff…so that helps too.

As this track began and instantly started putting out a unique vibe…heck yeah…I’m basically hooked right away, because I’ve got a curious mind and I wanna know where this goes.  I appreciate the poetic nature of the lyricism…though at times I did feel like it was based more in a wordplay/rhyming dealio as opposed to significant substance & meaning…I suppose it was a good mix of both things by the end of it.  What I liked more than anything else about the lyrics directly, was the word selection…Becca’s chosen wisely, and everything completely stands out in that regard.  It’s tangible enough to follow it, though there’s a good chance it’ll be a little bit over many of our heads too.  “Church Of The Inner Cosmos” is more designed to speak to your mind’s eye anyhow…think of it that way.  There’s still a performance aspect that needs to be fulfilled too…someone’s gotta bring those words to life for them to resonate with us of course – and I felt like Lorelei did a stellar job on that overall.  The way “ethereally” is drawn out at the beginning might grate on me a little bit…but I ain’t hatin’ on it…where one word might make us feel that way, there’s also a whole bunch of others that prove Lorelei’s genuinely gifted as an artist.  As far as the words themselves goes…I was cool with just about everything I saw in the lyric video and heard in this song…though I was truly confused by “Integration!  Not recreation!” if I’m being honest with ya…I was like…well damn – why can’t it be both?  But that’s probably on me folks…I’m just doin’ my level best to follow along with a couple of artists that could clearly write circles around what I’m capable of.  All-in-all, vocals & lyrics…it’s compelling stuff!  They had me listening and fully engaged the entire time, and you pretty much can’t ask for anything more than that in Spoken Word, or any genre for that matter.  Musically, I freakin’ love what I hear…there’s so much uniqueness in one tune it could practically rival any ALBUM…so that ticked the right box for me.  Message/meaning…it’s got that whole spiritual vibe to it, and I can dig that…I felt like I got more out of the second-half of the lyricism in this single than I did in the first personally, but that might just be me.  There was something so entirely relatable about getting lost in the maze of our minds…I connected with that…I felt that…heck – I AM that and at all of the times.  So yeah…lots of authenticity here, loads of uniqueness to offer your ears, something real to say from a collaboration that seems excited to have the opportunity to say it all to ya – tons of positives to be found within the wild & wonderful weirdness of “Church Of The Inner Cosmos.”

What DEFINITELY needs its full props and due credit, is the extraordinary lyric-video and the visuals that accompany this single.  I might have been enjoying myself already just in listening to it, but the added kickassery of this video from the colors to the effects to the brilliance of the layering and how we get to see just a tiny fraction of something before moving on to whatever’s next…what nothing short of freakin’ phenomenal if you ask me.  There’s so much extraordinary detail in this experience from what we hear to what we see…what can I say – “it speaks to me, ethereally” – just like they promised it would!  The ART involved here, is spectacular, straight up, full stop.  So heck yeah Becca Sameasu and Lorelei Roux – you’ve not only got my attention here, you’ve 100% earned it from sight to sound.  It’s rare that we can experience something in music and feel like it’s that different or unique from a whole lot of what we’ve heard from the roots of history on forward…but this qualifies.  There’s something undeniably different about this collaboration right here…it not only works, it’s exceptionally interesting.

Find out more about Lorelei Roux at the official site:  https://loreleiroux.com