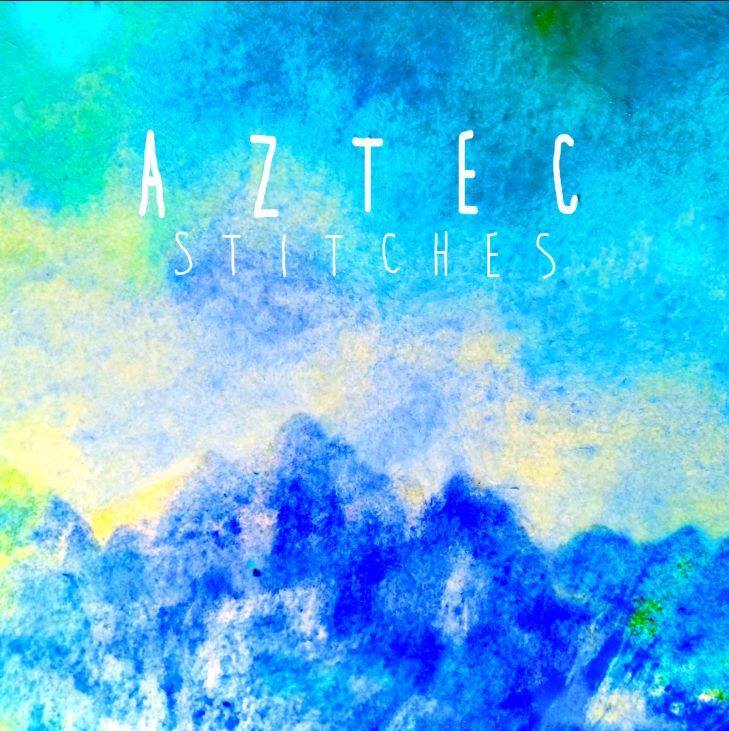 Days away from release to the public – the long-awaited debut from Canadian pop-rock band Aztec drops officially on the 11th of July. This band has had an electric-buzz of excitement surrounding this upcoming release ever since this super-group of indie musicians came together to make their music as one; and what I can certainly tell you upfront at the beginning of this review is that through the five tight tracks that made the Stitches EP, they’ve certainly lived up to their already stellar reputation.

It’s a reputation well-earned from exciting live performances and well-written songs that have incubated for nearly a year on those live stages before becoming immortalized in their recorded versions on this new EP. As we at sleepingbagstudios have been intensely following this band since the moment of their inception, I can tell you firsthand that these songs have all been tightened up in the very best of ways. The excellent, emotionally-intense songwriting you know and love from their live performances found a tight refinement on Stitches; a move that will certainly pay off well for this hardworking band.

It’s only fitting that the first track once bore the title itself; at one time called “Stitches,” never-mind refinement – this track now known as “The Benefits Of Being Alone” was processed in a sugar-plant and then sent off to be dipped in honey! Beginning with a sweet & slow opening before bringing in additional ripping guitars to completely fill in the sound, this opener packs a powerful punch into these opening minutes. Lyrically – this has always been one of my favorite Aztec tunes in any stage of its evolution, but it’s the exciting new choices Kyle Schepens has made as lead vocalist that are one of the most notable improvements from the early versions of this track.

Truthfully, that can be said of this entire EP. The amount of focus from Kyle throughout this EP is astounding – you can hear these songs have become completely whole, you can hear the clarity and tone in his voice have now found all the perfect spots and musical-indents to fit into. In many ways, though always being a main songwriter in any of his projects…I think we had all still been waiting on Kyle to really find that perfect spot for him to land in, not just in a song but a band as well. The guy has always been undeniably talented…but if you’ve followed him along with us…you might have always sensed there was still more potential that had yet to be uncovered.

With the confidence, passion and emotion he’s singing with now – it would be a literal shame to not acknowledge how much work he has clearly put in here on creating the perfect indie-tones to match the excellent songwriting. The backup vocals provided by the band certainly help fill the songs with real atmosphere…it’s all done in a very smooth way that almost feel like the backup vocals could be coming just as easily from the person sitting right next to you singing along.

“Too Shallow To Be A Grave,” second track in is a great example of this full band kicking it in full gear. Excellent guitar work coming from Saul Sitar on this one, a perfect beat & backing vocals from Amber Banman and bassman Patrick Gleeson keeps the low end rumblin’ on this energetic track. Each of these players go on to show incredible skills in their respective environments throughout the upcoming track “Untitled Part One.” Another track that has undergone musical-surgery from its humble beginnings to this recorded version – I can’t help being stoked for these guys; each of these tracks sound like they hit a natural progression without being forced into a formula. Sometimes tweaking a song back and forth can result in songs where you can HEAR the band is ‘trying.’ That tightness you hear on the Stitches EP now….that ‘we’re-in-this-together’ feeling you experience in listening….it all sounds so incredibly honest, natural and genuine. You won’t hear the struggle of a band adapting their songs from a stage to a record here in these five songs; they’ve found a way to make their hard work sound audibly-effortless.

Or as some people around this particular studio like to say…it sounds like people doing what they were MEANT to do. When a group of musicians come together and hit their stride all at the same time like Aztec has here – you can both hear AND feel through the music that you’re at the beginning of something BIG. The world’s attention-span genre-to-genre can change in a single heartbeat – and this music from Aztec could be the first pulsation in a change to the musical landscape out there. If it’s timing you’re looking for – they must have thought that out as well as this EP is designed for maximum volume on any summer drive.

“If I Believed Anything,” is pure piece of pop-rock perfection. We recently played the first-known recorded version of this song on our show SBS Live This Week…I was getting a bit nostalgic looking at that old footage of a then-solo Kyle, complete with authentic-indie HOLE in his guitar play this track at its earliest stage. Sometimes you truly have to just take a moment to sit still for a minute and really marvel at just how awesome it can be to watch & hear talent develop right in front of you. The recorded version of this song is a fucking home-run; a radical revamping of a track that shows good songwriting can always be a translatable thing when you’re working with the right people.

This EP sounds as tight as it does because it sounds like these four people BELONG together. There’s perfect skill in every corner and no one would dare drop the ball – it SOUNDS like they care! I know, I know, I know – that should be a GIVEN on any record right? Yeah…well…after publishing well over 100 reviews in this past year alone I can certainly tell you that’s not the case with many records out there. With this EP, it sounds like these songs were written, dissected, talked about, reassembled and then STILL double-checked for their own universal satisfaction…and it all sounds like music they should be PROUD of.

And IF that was the case – that’s a formula I can dig! By making music they’re excited about & would want to listen to as well – they’ve all but brought the kegger to your OWN party as that very excitement and energy translates easily into the listening ears of others. Stitches ends with a well-known track from their live performances; a crowd favorite for sure – “East” provides a hooked-out & undeniable summer power-pop-rock song. Another song that has been golden in any stage of its evolution, “East” has come to a glorious conclusion here in a recorded version that fully explores the loud/quiet dimensions of the song that have always worked so well and maximizes their every intent. The production on this album is certainly worthy of mention – every corner and pocket of this EP is tight, tight, TIGHT.

A commendable effort on every front – make the Stitches EP a part of your summer and get in on Aztec from the very beginning as they start into the rest of what is no doubt surely to be a long and successful career.

Follow Aztec at Facebook to make sure you get the official word the minute Stitches becomes available to you on July 11th 2014! https://www.facebook.com/aztectheband