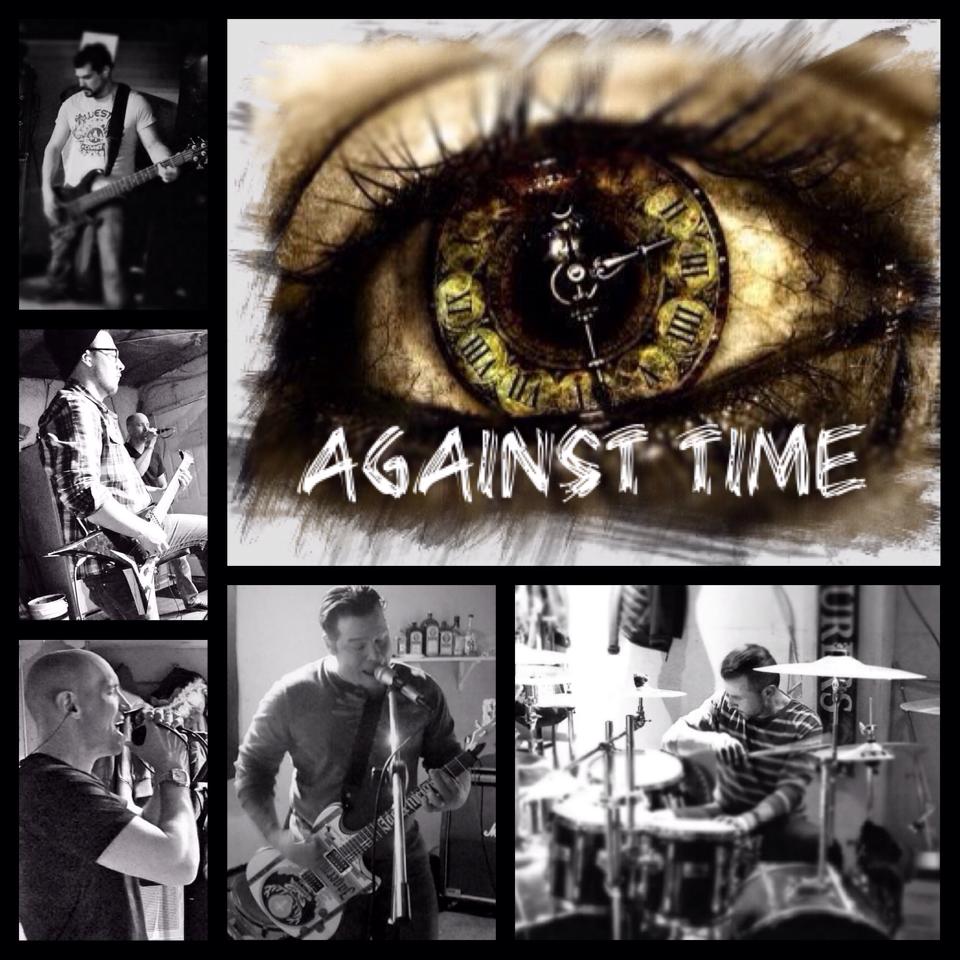 Heavy rock-band from Ottawa, Against Time makes a punishing mix of sludgy guitars, bass & drums – the meat & potatoes to go with the vocals – much like the inventive title to the new EP, this isn’t a band here to build themselves on flash & dazzle – it’s the music that matters to this Canadian four-piece.

Against Time have a lot of great things working for them, and a few qualities that need a little more time refining to reach their maximum power. Musically, these guys are pretty severe…most of my issues generally come through the vocals and tones from Mike their lead-singer; the dude is massively powerful, but still yet to fully harness his ability. Displaying moments of brilliance that clash slightly against a few moments that reach beyond the capability – there’s no question about whether or not he’s putting everything he’s got into it, he definitely is. It’s more to do with whether or not the tone itself can exist within the dark, dank-murk of the rock music in Against Time…and I think after a thorough listen you’ll hear what I’m hearing – there are times where it makes perfect sense and others that it sounds slightly out of place.

What I thought made this particular EP a little bit tougher to start was that the performance I was least sure about from Mike started out in the first track I listened to, which was “Breathless.” First of all – cut the guy some slack – this is a hugely ambitious song vocally and the demands are equal to a king’s ransom as far as what’s required from Mike to truly pull this off. Again, in moments you can hear he’s got what it takes to get there with no problems whatsoever really…so it might be a case of rushing the studio time…I’d cite moments like between 3:20-3:30 to get an idea of what I mean. It could also be choices and instincts, or perhaps my own personal preference even…but as the lyrics and song roll on, Mike continually reaches higher-up when in my opinion there’d be a lot of payoff & reward in switching between a high/low sound to better match the tones of the music. Because that music…it deserves the very best…there’s some seriously tight stuff happening in the background, evilly-crunchy guitars from Yan & Al, menacing bass and absolutely storming drums, especially towards the end of “Breathless.”

As I moved into “Brothers,” I largely felt the same way regarding both the vocals and music until something really magical happened around the 2:20 mark in this second tune I checked out. This song finds a beyond-brilliant breakdown and a whole-gear I’d yet to hear from them; it lasts less than a minute but this highly-memorable moment sticks out to me as not only something different but a sound/style that really worked well for them. Led by smooth bass from Bern, simplified beat from Elder & great Cornell-like vocals from Mike – I mean…I get that it’s not really what Against Time is out to sound like overall…but maybe this is an avenue worth exploring because it sounds freakin’ golden! That being said…the guitars that come crashing back in from Yan to start up the main vibe of the song once again sounds awesome too…there’s great contrast in this song that makes these parts standout dynamically and really capture the attention. “Brothers” definitely increased my confidence in Against Time and what they can pull off collectively for sure – great ideas in this cut.

Comparing Mike to Cornell isn’t all that far off really…early Cornell perhaps…and when you go down that road, it makes sense that a lot of what this self-titled effort sounds like are those early-stages of Soundgarden – who became, as we all know, giants of the genre as they continued to develop. And to defend Mike even further – go check out some of those early Soundgarden records and you’ll find Cornell wasn’t exactly hitting the mark 100% of the time either in every tone and moment – but that fucker gave his ALL to every record – just like Mike is here clearly. While in songs like “Come Undone” it’s still largely a case of him catching up to the quality of the music in-full, but you can hear that he’s more than 95% of the way there and when he reaches his full potential will more than likely become a sonic-force in this band. Because he also comes through high-above the music in tone so often, another effective method for this band would be to slightly sink him into the mix a little more – he’ll always break through, but it might also make the giganticness in the music standout & pop just a little more than it currently is. I think “Come Undone” shows us some of Mike’s best ideas through vocal-flow, but the song itself still sounds a little unfamiliar and not yet comfortable…I’d be willing to bet that each time they play this song now it continually sounds better and better and better when they haul it out live.

I think I ended with my favourite track from the Against Time EP – “Follow.” This is what I’m talking about in terms of comfort and knowing the song inside & out…everyone seems to hit their stride in-full here with the most confident performance on the EP. The energy & crunch of this song is at an all-time maximum and this last song I’ve got here really steps it up in pretty much every aspect. Should be important to note here, I have no idea about the official track-listing…so this order could be well out of whack – but in the end of the experience I’ve had here, it’s paid off for Against Time and I believe I’ve ended on their strongest tune of the set.

Here’s the thing…I know I’ve spent a lot of time talking about Mike…number-one reason being that I can hear there’s a great singer in there just waiting to fully breakout. But what makes a great singer? There’s no question that Mike can hit all kinds of crazy high-notes and go after the moon, stars & stratosphere when he sings…but even if he was to hit every note 100% of the time – is that what makes a great singer? Where I think Mike will eventually prove himself most in this band is through adaptation and really finding ways to match his own tones with the mood, atmosphere & energy of the music completely, perhaps by experimenting more with the lower-end of his spectrum instead of continually rising to the next occasion, whatever that occasion may be. Because sometimes I think it calls for it…others I think would really benefit from a change up in tone or energy, perhaps even backing vocals to add that low-end contrast.

The important thing is that the ideas are there. While many of the riffs and chops you’ll hear from Against Time will be rock-sounds you’re familiar with, they’ve got them assembled in pretty tight & clever ways that really do continue to keep you entertained as they grind through track after track. As far as I can tell…this looks like the first release from Against Time, which would then really equate to an exceptional start of a band we can safely assume will continue to grow, evolve…and eventually conquer.

Find out more about Against Time at their official page at: http://www.againsttime.ca